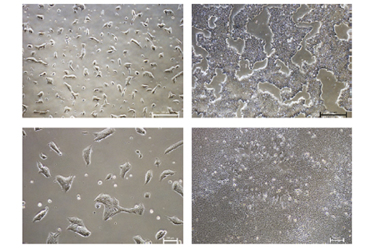 Human Pluripotent Stem cells (hPSC) are of great potential for cell therapy and regenerative medicine in many severe diseases. Removing xeno components and using feeder-free cultures is necessary to ensure robust and reproducible colonies during culture. Passaging as small and large aggregates using reagents such as collagenase or EDTA meet these xeno-free conditions, however they are not always compatible with desired downstream applications such as gene editing or CRISPR|Cas9 applications. As a result, single cell passaging is becoming a standard method in today’s cell culture practices.

Utilizing a completely dissociated single cell suspension for passaging generates a monolayer culture that has advantages of higher culture scalability, rapid expansion, and high efficiency. In addition, because of its quantitative nature, single cell suspension makes expansion of hPSC reliable and standardized. However, single cell passaging places the hPSC in stressful conditions, resulting in increased cell death. Usually, this requires the addition of a small anti-apoptotic molecule Y-27632, a selective inhibitor of Rho-associated coiled-coil kinase (ROCK), to avoid apoptosis and to increase hES cloning efficiency from ~1% to ~27% ¹.

When used with NutriStem® hPSC XF medium, LaminStem™ 521 promotes cellular survival and expansion of hPSC after plating from single-cell suspension. When cultured with LaminStem™ 521, the hPSC grow as a monolayer and remain pluripotent with minimal spontaneous differentiation. In the following section we will highlight a user-friendly protocol for single-cell passage of hPSC grown in xeno-free conditions with NutriStem® hPSC XF and Laminin 521.