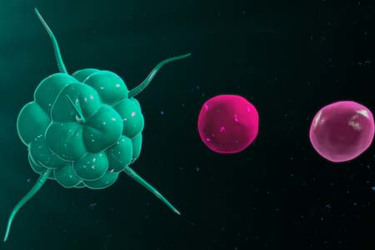 Visualizing the mechanistic action of molecules at the immunological synapse could provide insights to guide drug discovery and development strategy.

There’s a layer of truth in that old, worn-out joke about the man whose arm hurts when he lifts it above his head. You know, the guy whose doctor advises him not to lift his arm above his head anymore.

Science often recognizes problems, and observes solutions, without full understanding of the why behind said resolution.

Of course, observing the therapeutic effects of a biologic therapy and taking it to market isn’t quite as perfunctory as the good doctor’s advice to simply avoid the cause of the symptom. Still, therapies can—and often do—make their way to the market without a nano-level understanding of their mechanistic action. A new industry-academia collaboration just might change that.

It’s early days for Cue Biopharma’s CUE-101, the lead candidate in its IL-2-based CUE-100 Series. In pre-clinical studies, CUE-101 has demonstrated selective binding and preferential activation and expansion of antigen-specific T cells, dose-dependent effector cytokine production, and inhibition of tumor growth both as a monotherapy and in combination with a PD-1 inhibitor. Its first in-human clinical studies commenced last fall. Early results look quite promising. Cue Biopharma President and Chief Scientific Officer Anish Suri, Ph.D. says the finely-tuned binding affinity of IL-2 for its receptor has been documented to achieve preferential selective activation of tumor-specific effector T cells, while reducing potential for effects on regulatory T cells (Tregs) or broad systemic activation. That’s promising, because it holds the potential to mitigate the dose-limiting toxicities associated with current IL-2-based therapies while maintaining its selective activity on tumor-specific T cells.

Still, Dr. Suri acknowledges that Cue Biopharma doesn’t have the full picture of the therapy’s mechanistic action at the interface of the T cell immunological synapse, but he understands the scientific and strategic values of gaining that insight.

Enter The Father Of The Immunological Synapse

Rewind the clock more than two decades to then-Wash U and current University of Oxford professor Michael Dustin, Ph.D. defining the term immunological synapse as the “molecular interactions underlying regulation of the immune response that take place in a nano-scale gap between T cells and antigen presenting cells.” As that work was happening, Dr. Suri was one of the first rotational graduate students in Dr. Dustin’s lab. The two have remained in contact ever since, and in recent years, Dr. Dustin has followed the development of Cue Biopharma’s IL-2 scaffold and ensuing pipeline.

In the time that has passed since their acquaintance was made, Dr. Dustin’s lab at Oxford has continued to push the envelope using state-of-the-art imaging techniques and developed microscopy methods that’s enabled scientists to see what his seminal paper on the immunological synapse could only describe and loosely illustrate in the 1990s. The technology facilitates a live image of immune cell interactions, enabling scientists to track the movement and bilayer of an immune cell membrane as two cells come together.

That’s exactly the kind of visibility Dr. Suri has been looking for. “We’ve been curious, as are others who have been interested in our science, regarding the mechanics of CUE-101 during T cell engagement in the immunological synapse, but we don’t have the infrastructure to visualize interactions like membrane dynamics, the clustering effect, on target time, molecular architectures and so on,” explains Dr. Suri. Dr. Dustin, on the other hand, does have that expertise and infrastructure. Moreover, he’s equally eager to understand and decipher the novel interactions with our Immuno-STAT™ (Selective Targeting and Alteration of T cells) molecules and the related biological outcome from such interactions with relevant T cells.

Last month, Cue Biopharma announced a formal collaboration with Dr. Dustin and his lab at the University of Oxford to study the company’s Immuno-STAT biologics on T cell immunological synapse formation using the IL-2-based CUE-100 Series.

“We know we’re engaging and activating the right T cells, and the mechanism appears to be bearing out,” says Dr. Suri. “This is an extra, deliberate step to truly understand the mechanistic action and deep molecular insights, which would further help us understand the pharmacodynamic effects induced in treated patients.

It also will allow us to gain visibility into what other molecular players are involved in this action, which could reveal opportunities for Cue Biopharma to look at other areas of biology,” says Suri.

The collaboration with Dr. Dustin’s team at the University of Oxford —a non-transactional sponsored research program—is welcome news to Cue Biopharma investors. In addition to the inherent value of full mechanistic understanding, Suri sees the potential for discovery of additional targets and, in the nearer term, the discovery of additional T cell-centric metrics and potential biomarkers for subsequent trials. “At the translational clinical development level, uncovering new molecular signatures and footprint may give us a significant competitive edge,” he says. “We’ll be in a position to generate data in a relatively short period of time because we don’t have to reinvent any wheels. We have the prototype molecules; Dr. Dustin has the technology and expertise to study them.”

The company and its investors are equally enthusiastic about the long-term pipeline implications of the collaboration. Findings from the study will inform the company’s internal efforts to build out its Immuno-STAT platform to develop new and effective therapeutics for patients suffering from solid and hematological cancers—or even to build out future scaffolds to support new pipeline additions.

Visit Cue Biopharma to learn more about the company and its partnership with Dr. Dustin and the University of Oxford.