By Amélie Boulais and Nick Hutchinson 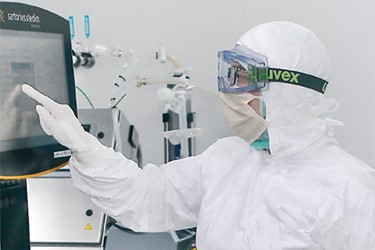 A new production facility for the GMP manufacture of viral vectors from nonadherent cell cultures is opening in Strasbourg, France. This will alleviate growing concerns that a lack of suitable manufacturing capacity is restricting the speed with which this nascent industry is able to bring viral vector products from the laboratory to the patient.

Patrick Mahieux, General Manager of ABL (Advanced Bioscience Laboratories) Europe, the contract manufacturing organization responsible for the site expansion, said that “The introduction of nonadherent cell-culture capacity complements our existing adherent cell-culture viral-vector production technologies. It is the only pure-play, dedicated viral vector production site capable of manufacturing drug substance and drug product materials for toxicological studies, all clinical phases, and even commercial launch. Everything from process development, manufacturing, and QC release testing is performed under one roof.”

This “all under one roof ” concept is key to Mahieux’s vision. Clients face considerable costs and avoidable risks when having to transfer processes between CMOs and production facilities during clinical development. “Many of our customers are at a very early stage with little more than a concept for a product. We can support them throughout their product’s life cycle with process development, clinical batch production, and then through process validation for commercial launch — all from within the Strasbourg facility. I also firmly believe that the development of processes and analytical testing must go hand-in-hand. Other manufacturers outsource QC testing or perform it at different locations within their group, but that gets more complicated and risky. Lead times increase as a consequence,” Mahieux said. He believes that CEOs of companies developing viral vectors are coming under increasing pressure to bring their products to market since Amgen’s successful registration of the T-VEC oncolytic viral vector product showed that such products could receive regulatory approval. This is increasing demand for a long-term production strategy.