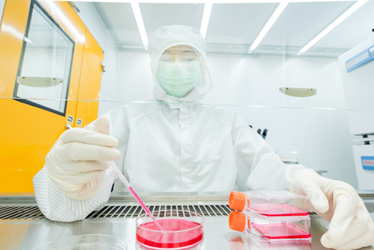 Filippo Petti learned the value of differentiation in creating business equity early on in his career in the life sciences. A biologist by training—he dual-majored in biochemistry and biology at Syracuse before earning his MS in pharmaceutical sciences at St. John’s University—Petti saw firsthand how the business of biotech works as an associate scientist at OSI. At the time, OSI had developed a product called Tarceva (Erlotinib), a non-small cell lung cancer drug which it licensed to Pfizer in a deal worth 6% of profits when the product went commercial. When Pfizer merged with Warner-Lambert in 2000, the FTC forced Pfizer to divest itself of four drugs to avoid a monopoly. OSI wound up with 100% rights to Tarceva, which was eventually approved and commercialized.

“When OSI’s stock subsequently ran up to $80 from $8 in a two-week span, the business lightbulb clicked on in my head,” says Petti. He watched closely as partnered with Roche and Genentech on the drug’s path to commercialization. That experience inspired him to put his Cornell MBA to work. He moved into investment banking and securities with William Blair and Wells Fargo, where in 2018, he found himself raising capital for a company called Celyad. Petti was brought on as CFO that fall, and named CEO the following spring. “Much of my time on Wall Street was spent in equity research,” Petti explains, “where I could exercise my scientific knowledge as I analyzed the competitive landscape.” That scientific background, coupled with his finance experience, helped him dissect the anatomies of preclinical- and clinical-stage companies and develop an informed opinion of what successful prospects looked like, and the experience has served him well at Celyad. Petti shared insight into the application of that learning with us on a recent episode of the Business of Biotech podcast.

The Search For Allogeneic Scalability

Celyad’s clinical portfolio is rooted in personalized autologous CAR T cell therapies. Its CYAD-02 candidate is a CAR T therapy that engineers an all-in-one vector approach in patient’s T cells to express both the NKG2D chimeric antigen receptor and short hairpin RNA technology to knock down the expression of NKG2D ligands MICA and MICB on the CAR T cells. “That was where we originally cut our teeth in the CAR T space, but more recently we’ve pushed forward with some allogeneic, or what we call off the shelf approaches, where we're taking healthy donor-derived white blood cells and engineering them to express these receptors or antibodies and subsequently using them to treat patients,” says Petti. While he acknowledges that there have been a handful of autologous cell therapy approvals, and that more are soon likely, it’s the non-scalability of the approach that triggers his biopharma business senses.

“The donor derived, or allogeneic approach allows you to move from a 1:1 relationship to being able to treat 15, 20, or hundreds of patients with cells derived from a single donor.” In Celyad’s Phase 1 CYAD-101 program in metastatic colorectal cancer, the company has indeed treated 15 patients with cells derived from one donor. The concept is neither new in theory nor in clinical practice, but Celyad’s focus is unique in that the company is taking a non-gene-edited approach. “For allogeneic cell therapy to work, the TCR (T cell receptor) that exists on white blood cells needs to be removed from the equation to eliminate rejection from the host cells,” says Petti, which is where gene editing became the standard.

“The CRISPR/Cas9 approach removes the TCR at the genome level using ‘molecular scissors,’ to reduce immune response from the patient,” he says.

Celyad seeks the same effect, albeit using a simpler, more scalable process. “Instead of knocking out the TCR at the genome level using those ‘molecular scissors,’ we use a non-gene-editing approach, which is a technology we’ve developed to express one of the components of the TCR to simply render it dysfunctional,” Petti explains.

The Value Of In-House Production

Celyad has developed the technology, and is using it to produce clinical supply, in its 10,000 square-foot manufacturing facility adjacent to its headquarters in Mont-Saint-Guibert, Belgium, about 30 minutes south of Brussels. That facility has been central to the company’s story for the past decade. “We were originally focused on the application of cell therapies for cardiovascular diseases, back when we were known as Cardio3 Biosciences. That’s where the technology we use to this day was developed, and where we transitioned from a cardio-based cell therapy company to an oncology-focused CAR T-based company producing immune cells rather than mesenchymal cells,” Petti explains. “As we transitioned to autologous programs for AML and on to our allogeneic candidates, it's been critical for us to be able to make manufacturing amendments and move through the repetitions required to tune our manufacturing approaches for current and future programs. Giving our scientists and developers the opportunity to control the work that dovetails with manufacturing, and having that expertise in house, allows us to be nimble in the lightning-fast cell therapy space,” he says. “The experience we’ve gained and capabilities we’ve built running multiple studies and shipping cell therapy products across several countries gives us know-how that doesn’t necessarily resonate with other organizations of our size, so we hit the ground running.”

Asked if the overhead and commitment to in-house manufacturing has ever presented itself as a liability, Petti takes a measured response. “Our manufacturing facility is not too big and it’s not too small. It’s a bit of a Goldilocks scenario—it's just right for a company of our size and shape and it suits our ability to get programs into clinical development,” he says.

In one case, Petti says that regulatory authorities in Belgium required Celyad to contract with a CDMO for the first leg of a phase 1 study of one of its early candidates. Eventually, the company was able to tech transfer the program back to its own manufacturing facility, where it regained the opportunity to optimize manufacturing processes. “Without having that manufacturing capability in house, we would have been stuck trying to find another CMO and trying to control that tech transfer from one partner to yet another third party,” he says. “There's certainly a cost associated with it, and we certainly need to commit resources to maintaining the facility, but it’s a net positive for us. We’re producing clinical supply for one autologous and two allogenic programs, and it’s been a tremendous benefit to supply these trials without relying on ‘just in time’ manufacturing.”

Petti acknowledges that as Celyad grows and moves toward late-stage development and commercialization, the company will have to consider building or outsourcing some additional infrastructure. “The benefit is that once we’ve locked down a process, we’re well-positioned to take that tech transfer and move it further down the pike,” he says.

Tune in to episode 31 of the Business of Biotech podcast for much more detail from Celyad CEO Filippo Petti on his company’s in-house manufacturing approach.