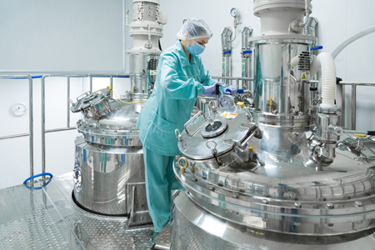 In the world of environmental monitoring for pharmaceutical manufacturing areas, it is common to rely on methods requiring media and subsequent incubation to detect microorganisms within the environment. These methods typically involve the use of media to recover viable microorganisms from surfaces and/or air with a plate or swab, followed by an incubation period of typically five to seven days. The results of environmental monitoring are used to support the area’s state of environmental control. When results are outside of a specified action limit or there is evidence of an adverse trend, an investigation is typically initiated to understand the root cause of these excursions. It is often difficult to assess root cause when the results are delayed in contrast to the actual event. Without real-time feedback, there is a reliance on what is known regarding the level of controls (e.g., HVAC, cleaning & disinfection, personnel hygiene, and gowning, etc.) and the activities occurring during that timeframe. For more extensive contamination events (e.g., mold occurrence), it is common to perform additional evaluations of areas that may be contributing to the contamination event. These evaluations are typically dependent on the same environmental monitoring methods that require incubation periods and time needed for potential organism identification to link to the common source. This can lead to extended downtime for areas and potential risk to adjacent areas until the source is identified and remediated. What if there was a better way to rapidly identify potential contamination and even confirm remediation in real time?

Integration Into Root Cause Analysis

The typical sequence of steps followed when applying BFP detection systems during root cause analysis is provided below in Figure 1.

Figure 1: Integration of a BFP system into root cause analysis1

If viable contamination (excursion) is observed, then the BFP system can be utilized to assess the area in more detail. This can be accomplished through one of two ways: Either the area can be scanned with the BFP system to assess the area and surrounding areas where excursions occurred, or a specific location can be surveyed while in continuous mode to understand if specific activities are contributing to potential contamination.

The detection of areas of concern should prompt further assessment and remediation. Once remediation is completed, the area and/or location can be reevaluated with the BFP system to ensure successful remediation.

Getting Started With A BFP System

Before utilizing a BFP system, the following considerations should be reviewed:

In addition, a protocol should be developed and utilized to capture the purpose, sampling plan, documentation of observations, and indication of how data will be used when employing the BFP system.

An increase in viable particle counts, both surface and air, was observed in a Grade D wash/preparation room. The increase in excursions was due to mold organisms detected at multiple locations within the room.

In general, a microbial contamination event occurs when you combine three elements: 1) source, 2) point of entry, and 3) the vector. The source refers to where the identified organism originated. The point of entry refers to the manufacturing processes or steps that have the potential to allow ingress of the subject organism into the area (i.e., ingress points within a facility). The vector is specific to the potential failure modes that combine the point of entry and the source leading to the contamination.

The investigation was divided into these three categories to evaluate each area and determine root cause per Figure 2.

It is important to note that during the initial root cause determination only traditional environmental monitoring was used to sample and assess the area. Multiple rounds of sampling were employed, but efforts were unsuccessful in pinpointing the source of the microbial contamination. A BFP system was introduced to evaluate the area and support the root cause determination.

These are depicted in Figure 3 (below).

Corrective actions were implemented to remediate these areas, followed by a decontamination of the area. The area was re-surveyed with the BFP system, and no additional signals of contamination were observed.

The BFP system expedited root cause determination and CAPA effectiveness by eliminating the need for incubation and reading of plates by the microbiology lab. In addition, the entire area could be easily surveyed to identify any potential signals rather than limiting the number of samples that would be taken due to constraints on resources and space available in the microbiology lab.

While the use of a BFP system supports expediting root cause investigation closeout, there are also several proactive applications that can avoid production downtime and prevent excursions. Specifically, a BFP system can be leveraged to ensure successful return to operation following major shutdowns, facility modifications, or breaches. Major shutdowns often involve turning off the HVAC system for an area and relaxation of gowning practices. In addition, work may be performed within the area that is an incursion to the area and requires additional decontamination to return the area to normal production. Environmental sampling is performed once the area is decontaminated following the shutdown to ensure that the area is returned to a state of environmental control. It is typical for areas to proceed into production pending the results of this environmental sampling, placing manufacturing at risk until satisfactory results are obtained. Leveraging a BFP system to scan the area following a shutdown period supports confirmation of the absence of any potential contamination and provides assurance of success for the environmental sampling. Areas where a high level of work was performed during the shutdown period as well as locations where there is a higher incidence of excursions based on historical data should be considered when scanning the area. Similarly, a BFP system can be used following breaches of the facility and subsequent mitigation to support effectiveness of the actions taken and confirmation that the facility has returned to a state of environmental control. An additional opportunity to proactively leverage a BFP system is following facility modifications to confirm that there is no impact resulting from the changes and to support establishment of a new baseline following these changes.

BFP systems expedite and support a more efficient investigation process for excursions and contamination events. This is accomplished through real-time feedback on potential areas of contamination from the BFP system as opposed to the typical five to seven-day delay in receiving feedback associated with traditional environmental monitoring methods that require sampling and an incubation period. Multiple rounds of sampling and corresponding incubation periods can be avoided by leveraging the immediate feedback and further pinpointing areas of concern with a BFP system. This results in a reduced burden of resources for sampling and within the lab to incubate and read samples. Further, a BFP system can be utilized to ensure CAPA effectiveness prior to return to production. While a BFP system can be leveraged to support rapid investigation resolution, it can also be used to proactively address environmental control in pharmaceutical manufacturing facilities. Examples of this include use of a BFP system following shutdowns, facility modifications, and breaches. Expediting the investigative process and proactively assessing areas with a BFP system minimizes potential impacts to production and ultimately the supply of critical medicines to our customers. While there are clearly many benefits to using a BFP system, it is worth noting that traditional environmental monitoring is still a fundamental component of the investigative process.

Dawn Watson is a director of engineering for Merck & Co. with 27 years of experience in the pharmaceutical industry. She works in Global Science & Technology Services managing a team that leads and executes global initiatives, provides expertise to resolve critical production issues, develops innovative solutions, and ensures network alignment with industry and regulatory expectations.