The Methylation Analysis Landscape In 2022 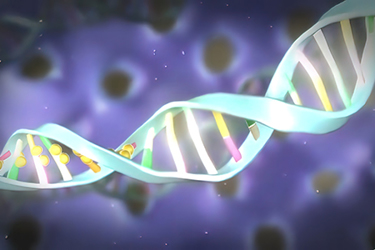 Within liquid biopsy, methylation has become a key area of interest due to its role in altering gene expression and its ability to provide information on tissue-of-origin for ctDNA. The addition (or absence) of methyl group to cytosines in one's DNA has been shown to have relevance across a number of disease states within neurology, immunology, and most notably, oncology (Figure 1). Oncology remains the most developed application for methylation analysis to date, with it being mentioned in an ever-increasing number of publications (Figure 2).

The explosion of methylation as a biomarker in oncology stems from its ability to serve as an indication for the presence of cancer early in development. Changes in DNA methylation have been shown to correspond with the development of cancer cells, with many of these changes in methylation status occurring early in the life cycle of cancer, making methylation a useful biomarker for early detection (EDx). Correspondingly, commercial methylation tests within oncology are primarily concentrated in Edx, with some minimal residual disease (MRD) and monitoring products and even fewer tools for therapy (Tx) selection (Figure 3). While Tx selection currently represents the minority application for methylation within oncology, this area may experience growth as it mirrors the development of any methylation-based therapeutics. As methylation continues to grow, companies focused in EDx are likely to branch out into MRD, with several companies already doing so (e.g., Guardant, Exact Sciences, and others).

The power to detect the presence of cancers can be increased by combining multiple analytes and methods of detection into one test. As such, many diagnostic tests employ multiple analytes to investigate other alterations in addition to changes in methylation patterns. In addition to DNA analysis, protein, RNA, and fragmentomics are additional analytes being utilized in commercial tests (Figure 4).

Today, the methylation analysis space is largely driven by its application in clinical oncology. This is bolstered by recent commercial availability of highly anticipated products such as GRAIL’s pan-cancer Galleri test, which GRAIL has estimated could reach up to 50 million people in the clinic. In addition, GRAIL recently announced that it plans to pursue full FDA clearance for its Galleri test in 2023. The introduction of methylation-based EDx assays into the clinic, by GRAIL and others, signifies a shift from a genomics-dominated landscape to one driven by novel and multiple -omics modalities.

As diagnostics bring increased attention to methylation, the field must innovate to accommodate this growing interest. One key barrier ripe for innovation is the industry standard approach of bisulfite conversion. The process, which turns unmethylated cytosines into uracils, while methylated cytosines remain unchanged, has long been seen as arduous and inefficient as DNA undergoes high levels of damage during conversion. Numerous players are currently competing to develop alternatives to bisulfite conversion. The current landscape of alternative approaches is largely made up of enzyme-based methods (New England Biolabs and Base Genomics/Exact Sciences), direct sequencing methods (Oxford Nanopore, Pacific Biosciences), and differentially methylated region capture methods (e.g., Adela Bio, BlueStar Genomics). The competition in the space is bolstered by key acquisitions such as that of Base Genomics by Exact Sciences in 2020. Base Genomics’ proprietary TET-assisted pyridine borane sequencing, or TAPS, aims to allow users to detect cytosine at single base-resolution, requiring a lower input of DNA. TAPS causes less DNA damage and allows for increased sequencing complexity, lowering the associated sequencing costs. As a result, it may be possible not only to detect cancer at much earlier stages but also to do so on a much larger scale. With Exact now owning TAPS technology, it is not offered commercially. Instead, Exact aims to employ Base Genomics, and their TAPS technology, to develop a multi-cancer early detection blood test. With multiple players jockeying to try to replace bisulfite conversion both commercially and for their own tools, this is an exciting area of the field to watch. As market dynamics continue to evolve and key innovations emerge, becoming a standout could lead to significant success for any of these groups.

Similarly, with the majority of diagnostics companies using next-generation sequencing (NGS) as their analytical method of choice, the cost of sequencing can serve to either drive or moderate growth of methylation analysis, especially in the pipeline from research to the clinic. A decrease in associated sequencing costs will support accessibility of these tests in the clinic and methylation-based methodologies in research settings.

In neurology, methylation is still largely used in conjunction with oncological applications. Primarily, methylation is used in profiling clinical treatment responses for brain tumor treatment. Temozolomide is a chemotherapy drug designed to treat patients with glioblastoma (GBM), a type of brain cancer. The methylation level of MGMT, a DNA repair enzyme, is used as a predictive marker for temozolomide response. Outside of this clinical stratification to inform treatment, methylation remains largely of academic interest with few diagnostics addressing brain cancer.

It is well known that the DNA methylation status of tissues is indicative of biological age. Beyond this, research into epigenetic age aims to determine mechanisms of aging and potentially elucidate therapeutics for age-related diseases. Clinical applications remain undeveloped as research is still nascent.

Additional areas such as immunology, non-invasive prenatal testing (NIPT ), or post-transplant screening exist but remain relatively nascent in the exploration of methylation. These applications, as well as neurology and aging, have not yet experienced the significant growth that oncology has, likely due to use primarily in academic settings with only some emerging clinical relevance. As methylation research expands, it is likely that these areas, too, will begin to see the introduction of methylation-based therapies and diagnostics.

Unsurprisingly, North America has the highest concentration of diagnostic companies, with well over half of the companies profiled having headquarters in the United States. Europe has the second largest number of companies regionally with five companies across Germany, Belgium, Denmark, and the United Kingdom. Asia has four companies, with three of them located in China and one in Israel. As individual countries, China and the United Kingdom follow the United States with three and two companies, respectively. Within these three countries, regional trends stand out. In China, two of the three companies come from Guangzhou in the Guangdong province. In the United Kingdom, both headquarters are in university cities, with one in Oxford and the other in Cambridge. In the United States, well over half of the companies are located in California. With each of these areas offering a high concentration of research and already established life sciences companies, these will be key regions to watch for emerging companies and innovation as the methylation field continues to evolve and grow (Figure 5).

Looking ahead, we can expect to see activity in methylation analysis continue to accelerate due to a combination of factors. The growing use of methylation biomarkers in oncology as well as increasing accessibility of technology are key elements driving this acceleration. Key barriers such as bisulfite sequencing are already experiencing continuous attempts at innovation and improvement, and it will be exciting to see how these barriers evolve with time and support the overall growth and market dynamics of the field. Areas outside of oncology, such as neurology or aging, may also experience an increased interest as research expands in the coming years with a potential for a diagnostic market to emerge down the line in these spaces. Overall, the increasing attention to methylation analysis and its applications in both research and the clinic has created a compelling space to watch, with the potential to make significant impacts on patients’ lives and health outcomes. 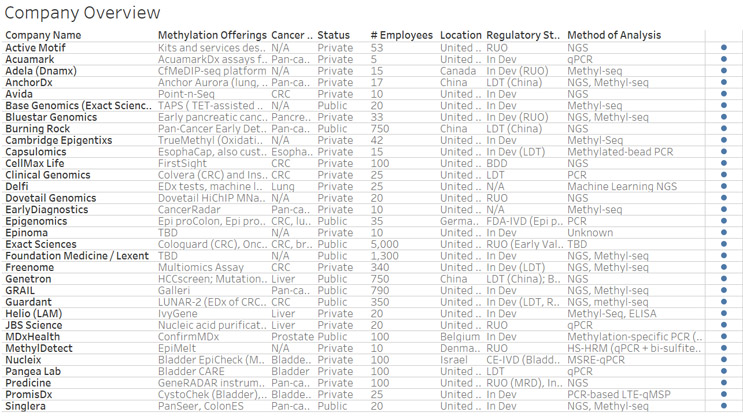 Katherine Erickson is an analyst at DeciBio, a precision medicine consulting firm. She provides strategic vision to both established and emerging companies in the life sciences sector. With a B.A. in biology from Scripps College, her core interests span cancer detection, biomarkers, and liquid biopsy.