The Current Landscape Of mRNA Vaccines In Clinical Research 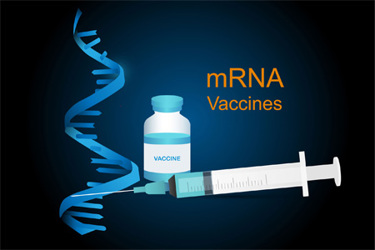 Messenger RNA (mRNA) vaccines made global headlines in 2021 in the fight against the SARS-CoV-2 virus responsible for COVID-19 (through the Pfizer-BioNTech and the Moderna vaccines). The principle behind these vaccines is to use engineered mRNA to provide instructions to cells to signal the immune system to create antibodies against specific viral pathogens of concern. This works because the mRNA is immunostimulatory and it has been coded for a disease-specific antigen; the antigen is recognized by the immune system and the appropriate antibodies are produced. An important safety feature of mRNA vaccines is that the mRNA component breaks down after it has served its purpose and it does not enter the nucleus of cells (the mRNA cannot be incorporated into the genome).

mRNA vaccines against the coronavirus are not the only biotechnological products in the pipeline. Other genetic immunogens mRNA vaccines have been subject to research for several years, including those intended to act against viruses and viral diseases like influenza, cytomegalovirus (a herpes related virus), dengue fever, Zika, and rabies and against malaria parasites.1 Current research is also looking at the use of RNA vaccines for certain forms of cancer (immunotherapy).2

Investment in mRNA vaccines is high, based on the successful immunization efforts against SARS-CoV-2 and because such vaccines are cheaper to produce than traditional vaccines. In theory, because the “active” part of the vaccine is only formed from an mRNA strand that codes for a disease-specific antigen, developing mRNA vaccines should be faster than developing other types of vaccines. There is also an argument that such vaccines are safer for the patient because they are not produced using any of the actual virus of concern.

This article assesses the developmental landscape for mRNA vaccines and considers the types of diseases that this area of vaccinology can be used to combat.

There are three groups of mRNA vaccine types:3, 4

As mRNA vaccines develop, the optimal method for drug delivery will follow. mRNA vaccines can be delivered into the body through conventional needle-syringe injections or needle-free into the skin and  via injection into the blood, muscle, lymph node, or directly into organs. It is also possible to deliver the vaccine via a nasal spray.

One reason there is interest in developing mRNA vaccines beyond those for COVID-19 is to treat a wider range of infectious agents. mRNA vaccines can overcome limitations of conventional vaccine approaches, which have failed to produce efficacious vaccines against most viruses that cause chronic or repeated infections, such as HIV.

An experimental HIV vaccine based on mRNA is showing promise in mice and non-human primates. Data analyzed shows the vaccine is safe and it has prompted desired antibody and cellular immune responses against an HIV-like virus. For example, Rhesus macaques administered with a priming vaccine and multiple booster inoculations displayed a 79 percent lower per-exposure risk of infection by simian-human immunodeficiency virus (SHIV) compared to unvaccinated animals.5

The advent of mRNA technology has the potential to produce a prophylactic genital herpes vaccine to prevent herpes simplex virus (HSV)-1 and HSV-2 genital lesions and infection of dorsal root ganglia from occurring.6 Researchers are undertaking trials using nucleoside-modified mRNA-lipid nanoparticle vaccines, which have entered Phase 3 trials. To date, the vaccine has induced higher titers of neutralizing antibodies compared with the more conventional path of protein-adjuvanted vaccine development.7

Respiratory syncytial virus (or human orthopneumovirus) is a contagious virus that causes infections of the respiratory tract. An mRNA vaccine may provide the answer, although it is only one of four respiratory syncytial virus vaccines in Phase 3 trials (two vaccines contain the stabilized protein itself; another uses a modified adenovirus). The mRNA virus delivers modified mRNA that produces prefusion F (preF) protein once the RNA is inside cells. preF is a protein that, following a shape transformation, the virus uses to latch onto cells to launch an infection. The aim is for the mRNA vaccine to induce a T-cell response by mimicking the response to live virus infection.8

mRNA technology is potentially suitable to create influenza vaccines due to the ability to elicit high levels of antibodies that can recognize antigenically diverse viral strains. In a future model, it will be straightforward to update mRNA influenza vaccines as the virus mutates. Research has been undertaken into the H1N1 viral strain using mice and ferrets. The trial mRNA vaccines help to produce antibodies that target epitopes, conserved structures found across different influenza virus strains. This could be the key to unlocking universal influenza viral protection.9

Small human trials studying influenza virus mRNA vaccines have already been conducted and this area is likely to expand given the success of SARS-CoV-2 mRNA vaccines in humans.

Zika And Other Pathogens

mRNA vaccine research is underway for other viral diseases, such as cytomegalovirus, dengue fever, Zika, and rabies. These are at an earlier stage of development. For example, a modified mRNA vaccine containing the E and PrM proteins10 is undergoing concurrent Phase 1 and 2 clinical trials for use against the mosquito-spread Zika virus. Research into an mRNA vaccine against dengue fever is at a similar stage.11

As an example of a non-viral application, self-amplifying mRNA vaccines that enable the self-replication of mRNA (allowing for smaller quantities of mRNA to be used for vaccine delivery) are under development for malaria.12

The objective of cancer immunotherapy is to use the body's own immune system to prevent, control, and eliminate cancer. mRNA cancer vaccines use naked or vehicle-loaded mRNA to express tumor antigens in antigen-presenting cells and trigger innate or adaptive immune stimulation.

The main limitations with the development of these vaccines are with instability and innate immunogenicity. However, recent clinical trial data is promising, with success reported against multiple aggressive solid tumors from multiple trials. Around 50 clinical trials have reached Phase I or Phase II clinical trials. This raises expectations of an mRNA cancer vaccine obtaining regulatory approval in the near future.13

mRNA vaccines hold promise against a spectrum of viral diseases. While there are challenges to overcome, including instability, optimal drug delivery, integration into the host genome, toxicity, and immunostimulatory and inflammatory responses, the number of mRNA vaccines at Phase 2 and 3 clinical trials is promising and suggests a central place for nucleic acid vaccines alongside more established vaccine types.

Tim Sandle, Ph.D., is a pharmaceutical professional with wide experience in microbiology and quality assurance. He is the author of more than 30 books relating to pharmaceuticals, healthcare, and life sciences, as well as over 170 peer-reviewed papers and some 500 technical articles. Sandle has presented at over 200 events and he currently works at Bio Products Laboratory Ltd. (BPL), and he is a visiting professor at the University of Manchester and University College London, as well as a consultant to the pharmaceutical industry. Visit his microbiology website at https://www.pharmamicroresources.com.