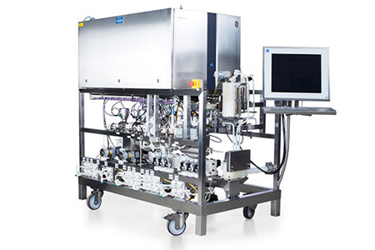 As an extension of the concept of inline dilution (ILD), inline conditioning (IC) is a buffer management strategy that allows for inline buffer production from single-component, highly concentrated stock solutions. From a limited number of stock solutions, a wide array of buffers can be prepared. The BioProcess IC system mixes the required amounts of each component according to a buffer recipe specification, enabling an exact amount of buffer to be produced when needed. Depending on parameters, different modes of feedback control can be used through the inherent dynamic control function.

Inline conditioning addresses the challenges with large floor space requirements and inherent variability in manual buffer preparation. Automating the process allows to produce buffers when they are needed, streamlining buffer preparation. The system can be optimized to fit the process and facility by either integrating it into the chromatography unit operation or by using it as a standalone buffer preparing unit. To further intensify the buffer preparation process, ready-made stock solutions can be used, eliminating all raw material handling and manual preparation of stock solutions. Advantages of using single-component stock solutions as opposed to concentrated buffers for dilution, are that the common ion effect will not limit the maximum concentration to the same extent and there is no need to handle pH and conductivity shifts due subsequent dilution.