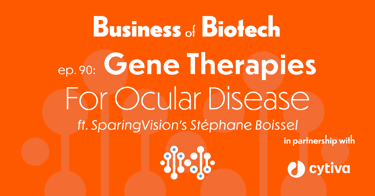 Since assuming the President and CEO role at Sparingvision in August 2020, Stéphane Boissel has been making big moves in the arenas of talent acquisition and IP expansion. Those efforts are securing the company's development of a number of genomic medicines to address inherited retinal disease. On this episode of the Business of Biotech, Boissel shares the company's foundation story and the role venture philanthropy played in it, his strategy for attracting and retaining big-league talent, and the why behind his vigorous allegiance to internal development.