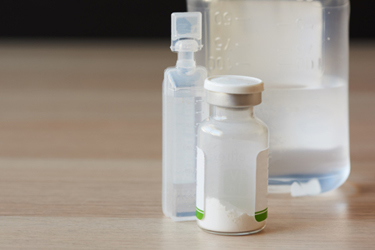 Robert O. (“Bill”) Williams III, Ph.D. is division head of the College of Pharmacy’s Division of Molecular Pharmaceutics and Drug Delivery at the University of Texas at Austin. He holds 49-and-counting patents in the fields of drug delivery, processing, and biotechnology.

One of his most recent accomplishments was co-invention of a new approach to preserving therapeutics of virtually any stripe — from both large and small molecules to vaccines and botanicals – in a manner that could hold several therapeutic and cost advantages. The project was born of a collaboration with Keith P. Johnston, Ph.D., Professor in Chemical Engineering at UT Austin and The Dow Chemical Company to enhance the deliverability of poorly water soluble drugs. When Dow divested, the project’s IP portfolio came back to UT Austin before catching the attention of Brian Windsor, Ph.D., a fellow UT Austin alumni and president and CEO of Lung Therapeutics. Windsor in-licensed the portfolio and decided to build a company around it.

This is a particularly timely development in the context of COVID-19, where so many promising candidates have struggled to adequately find and destroy their target. I caught up with Dr. Williams, along with Glenn Mattes, CEO and Dale Christensen, Ph.D., clinical consultant to the company that was formed to develop and commercialize the technology. That company is aptly named TFF Pharmaceuticals, an acronym for the technology itself—Thin Film Freezing.

Williams explains the process of thin film freezing as relatively straightforward. The company takes an active ingredient – whether a small molecule drug or a biologic like DNA, RNA, or a vaccine—and dissolve it in a solvent of straight water, or water mixed with an organic cosolvent. TFF adds inactive carriers to transport the active ingredient into the body, and rapidly freezes the solution into a thin film that’s fewer than 500 micrometers. The company’s intellectual property, says Williams, is specific to the freezing rate. That’s key to the process, as the rapid freeze rate, he says, locks the molecules into a state that thwarts degradation. The frozen solvent is then sublimated, leaving behind a fine powder that the company claims will lend itself well to inhaled delivery, nasal delivery, or reconstitution back into liquid form for injection.

Williams admits that he and his fellow inventors were initially concerned about the technology’s effect on biologics. “We were initially concerned about proteins and peptides,” he says, “because if you don’t freeze them rapidly enough, you’ll denature the molecule.” TFF’s approach, which freezes droplets upon contact with the surface in anywhere from 50 to 2,000 milliseconds, drastically reduces the required surface area to volume ratio. Williams says that results in a powder that’s almost exclusively highly active drug when the solution is crystallized.

Spray drying, which uses heat to cause evaporation, is another common technology that’s been used for decades to form dry powder. Williams says the approach doesn’t produce powders of a high enough porosity to enable efficient deep lung delivery, and that a soon-to-be-published study demonstrates that spray drying tends to produce more poorly designed particles than thin film freezing.

Slower methods like lyophilization, says Williams, require prolonged exposure of the protein or peptide to an interface, which introduces an increased risk of molecular degradation and potential for the introduction of contaminants. Thin film freezing’s cooling rate, he says, is anywhere from 100 to 1000 times faster than freezing via lyophilization, which enables the aforementioned reduction in surface area to volume.

Christensen, who’s been involved with TFF from the outset, says its dry powder inhalable products were initially designated to facilitate therapies for injured and diseased lungs, as well as organ rejection after lung transplantation. But, as the company has grown, it’s moved beyond the lung. “We’ve progressed to the point where we see potential for the technology to be more ubiquitous,” says Christensen. “We’re looking at indications that can benefit from intranasal, intraocular, and topical drug delivery as well.”

Christensen says stable powders developed with properly-sized particles can be delivered to all parts of the lung, a considerable advantage over subcutaneous delivery. “There has been some discussion about mucosal immunity,” explains Christensen. “The body powers immunity in the GI tract using IgA to protect from infectious organisms. Traditional vaccines administered via shot tend to bypass mucosal surfaces, therefore they fail to elicit an IgA response.” TFF believes this might explain why some of these vaccines don’t work well for respiratory diseases. “With the appropriate powder, an alive or killed virus delivered to the lung will produce antigen at the site, as well as an IgA and secondary IgG response, resulting in systemic protection.”

Mattes says the efficacy gain is directly related to a cost benefit in both vaccines and therapeutics. “We’ll take a lower dose into the lung and produce equal to better efficacy with a better adverse event profile,” he says. He points to antifungals commonly prescribed to treat pulmonary aspergillosis as an example. These drugs are typically given intravenously and transition to oral dosing over a long period time. As a class, these drugs result in hepatic toxicity and liver enzyme elevation. Twenty percent of patients receiving the recommended dose suffer visual disturbances such as blurry and double vision, which often cause them to discontinue the treatment. The drugs are also strong inhibitors of systems that metabolize other drugs, resulting in strong drug-drug interactions. “In cases of pulmonary aspergillosis, traditional administration of antifungals results in a high drug concentration in the GI tract, 50-80 percent bioavailability in the blood, and maybe 10 percent gets to the lung,” says Mattes. “In other words, if you take a 200 milligram dose, maybe 150 milligrams go systemic and 10-20 milligrams make it to the lung.” In this case, he says TFF technology would enable delivery of an 80 milligram dose directly to the lung, with no decline in pulmonary function, no visual disturbances, and no hepatic toxicity. “With 40 percent of the dose traditionally administered orally, we believe we can eliminate adverse side effects while delivering a greater therapeutic dose directly to the lung.”

The other big advantage TFF is touting deals with the cost of cold chain logistics. Taking a solution-based vaccine to a powder, the company says, drastically reduces the cost of storage and transport by virtually eliminating the need for a (very) cold supply chain. The two leading mRNA vaccines, for instance, require minus 20 to minus 80 degree temperatures to remain viable. Mattes says in at least one example, a dry powder created by thin film freezing has proven to maintain API activity and stability when stored at 25 degrees for up to six months. “In some cases, 80 percent of a vaccine’s cost can be attributed to the temperature control required in a cold chain,” says Mattes.

The potential of the advantages TFF is exploring hasn’t gone unnoticed. Williams says the company is working with more than a dozen big pharma companies to test the technology on biologics and COVID-19 vaccines. “Most of these companies have tried spray drying and found that it doesn’t work well with siRNA, plasmid DNA, and mRNA,” he says. “We’ve engaged in several technology validation agreements, where we bring in the particular biologic, make samples, test the samples, and send those samples to the biopharma company for their own internal testing. Those agreements have resulted in multiple validations.”

All told, TFF is currently working on material transfer agreements and statements of work with 20 different companies on vaccines, biologics, new chemical entities and botanicals, including UNION Therapeutics (niclosamide), the University of Georgia (flu vaccine), and the U.S. Amy (antiviral monoclonal antibodies and antivirals). That’s in addition to the company’s three internal programs; a dry powder formulation of voriconazole to treat Invasive Pulmonary Aspergillosis, the immunosuppressive drug tacrolimus used in solid organ transplants, and an inhaled dry powder drug combination intended to treat COPD and asthma. Those programs are operating under the 505(b)(2) regulatory pathway intended for molecules that have been previously approved by the FDA as safe and effective.

“If we can formulate it, we show interest in working with the innovator,” says Mattes. “But, even if we create a successful formulation, the product has to work. If their efficacy studies turn out right, we’re optimistic about the advantages of thin film freezing.”