New Discoveries For Hemophilia A 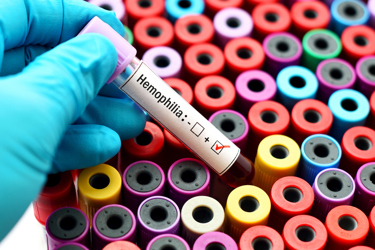 The Mayo Clinic describes Hemophilia A as a rare, inherited disorder in which the blood doesn't clot normally, because it lacks sufficient blood-clotting proteins (clotting factors). People with hemophilia may bleed for a longer time after an injury than they would if their blood clotted normally. Hemophilia A, also known as classical hemophilia, is a genetic bleeding disorder caused by insufficient levels of a blood protein called factor VIII, which is a clotting factor.

A serious inherited hematologic disorder, Hemophilia A is characterized by mutations in the F8 gene, which lead to deficient blood coagulation and an increased risk of bleeding or hemorrhaging. Although there is no cure for hemophilia, effective therapies have been developed. Most affected individuals can lead full, productive lives by maintaining proper treatment and care. Hemophilia A mostly affects males, but females can also be affected. Approximately 1 in 5,000 newborn males have hemophilia A. Approximately 60% of individuals with hemophilia A have a severe form of the disorder. Hemophilia A is about four times as common as hemophilia B, which is due to a deficiency of factor IX. All racial and ethnic groups are equally affected by hemophilia.

Although any bleed can be serious, the severity and frequency depend on the baseline level of factor VIII protein present. In patients with severe disease, excessive bleeding can occur without a triggering injury. Untreated serious bleeds can lead to long-term irreversible damage or even death.

According to Spark Therapeutics, the current standard of care for hemophilia is to control or prevent bleeding episodes through clotting factor replacement therapy, which is taken for life. Replacement factor is either recombinant (genetically engineered) or plasma-derived (from healthy blood donors) and must be delivered by frequent Intravenous (IV) infusions. Spark Therapeutics recently announced updated data from the ongoing Phase 1/2 clinical trial of investigational SPK-8011 in hemophilia A during the International Society of Thrombosis and Hemostasis (ISTH) 2021 Virtual Congress.  Spark retains global commercialization rights to its SPK-FVIII program includes both SPK-8011 and SPK-8016 for hemophilia A. These data demonstrated that administration of SPK-8011 in patients with hemophilia A resulted in sustained factor VIII (FVIII) expression in 16 of 18 participants with up to 4 years of follow-up, as of the May 3, 2021 data cutoff.

Spark states that administration of SPK-8011 in patients with hemophilia A resulted in an acceptable safety profile with no deaths and no FVIII inhibitor development with up to 4 years of follow-up. Two of the 17 participants with over one year of data lost FVIII expression due to a presumed cellular immune response to the AAV capsid that was unresponsive to immunosuppression. Seven participants reported transient, asymptomatic liver function test (LFT) elevations. All LFT elevations were mild or moderate and have resolved. One participant experienced a mild to moderate acute infusion reaction, which presented as four nonserious adverse events (AEs) (pyrexia, myalgia, vomiting, and back pain) and were resolved. One participant experienced Grade 2 transaminitis, which resulted in elective hospitalization for IV steroid administration, qualifying as a serious AE. The event was subsequently resolved. Across all dose cohorts, there was a 91.2% reduction in annual bleeding rate (ABR) post-SPK-8011 administration and a 97% reduction in annual infusion rate (AIR).

These data reinforce the ability of AAV gene therapy targeting hepatocytes to achieve stable and durable FVIII expression with an acceptable safety profile.