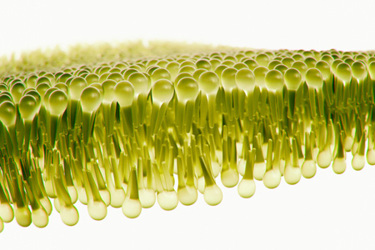 The field of lipid research has grown immensely in recent decades. Lipids were initially thought to simply be structural components of cellular membranes, but the ongoing study of lipids and their functions has shown these diverse molecules are very active participants in many biological processes. Recent studies have shown lipids to play direct or causal roles in many human disease states, such as Alzheimer’s, metabolic syndrome and lysosomal storage disorders. They have also been used as potential biomarkers. For instance, a shift in the double bond from a ∆7 to ∆9 in a phospholipid has the potential to be a biomarker for breast cancer, and a change in the sn-1 and sn-2 positions of an acyl chain in phosphatidylinositol has the potential to be a marker in urine for prostate cancer.

Although lipid species generally fall into classes that share specific subgroups and configurations, the diversity of lipid molecules is enormous. Characterization of lipids must not only include the identification of molecular composition but also details about individual components such as class, head groups, lengths of different fatty acids, modifications, attachment points, numbers and positions of double bonds, and even cis/trans configurations. As a result, the complete structural elucidation of lipid molecules has generally been an arduous task composed of a series of characterization steps that use different methodologies.

Here, electron activated dissociation (EAD) on the ZenoTOF 7600 system is used for the complete structural elucidation of glycerophospholipids, sphingolipids, and acylglycerols in a single experiment. In contrast to the more commonly used collision activated dissociation, or CAD, EAD provides an abundance of unique fragment ions critical for complete lipid characterization.