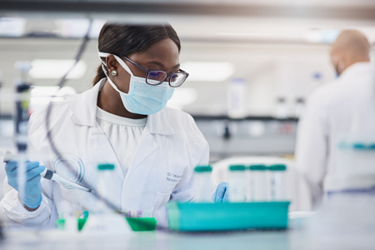 Viral vectors are increasingly used for gene transfer to specific tissue or to induce cell type modifications. Recombinant adeno-associated virus (rAAV) are the most widely used vector for gene therapies.

We developed a recombinant adeno-associated virus serotype 5 (rAAV5) bioreactor production process — ranging from the cryovial to the purified, sterile filtered bulk product. The process is closed and based on serum-free culture in HyCell™ TransFx-H medium, with no animal derived components used and compatible with GMP requirements.

In this application note, we describe how we expanded HEK293/HEK293T suspension cells from small cell culture (20 mL) in shake flasks up to a 10 L culture in a benchtop Xcellerex™ XDR-10 single-use bioreactor system. AAV was produced at high titers upon transient plasmid transfection in the bioreactor. We also produced rAAV5 in ReadyToProcess WAVE™ 25 bioreactor system, up to 20 L. We present data that the process is suitable also for other serotypes such as AAV2, AAV8, and AAV9.